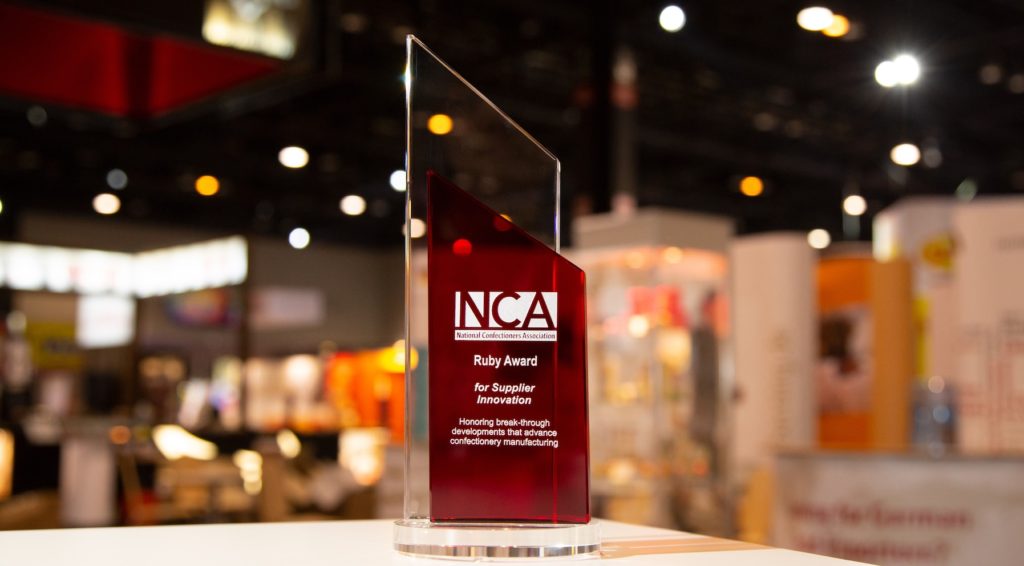 Chicago — At an awards ceremony last night, Barry Callebaut was honored with the NCA Ruby Award for Supplier Innovation for its WholeFruit chocolate. American Packaging Corp. and Blommer Chocolate Co. were each named finalists.

In presenting the awards, Ed Seibolt, chair of the Sweets & Snacks Expo, remarked that the judges had a difficult time choosing one winner. “In the spirit of our innovative and collaborative industry, why not celebrate all three,” he said.

The Ruby Award, founded in 2018, is presented to suppliers that have enhanced the confectionery industry through breakthrough technologies and innovations. The winners are chosen by a panel of judges based on company submissions.

This year marks the second time Barry Callebaut has received this honor. The Ruby Award was named for its inaugural recipient: Ruby chocolate, which was developed by the company.

“There is no greater honor than to have your accomplishments recognized by industry peers,” Steve Woolley, president and CEO, Barry Callebaut Americas, said. “Receiving the Ruby Award, especially for the second time, showcases us as the premier innovation leader in the industry.”

According to the company, the WholeFruit chocolate is made from 100 percent pure cacaofruit, which adds a natural sweetness. The development process utilizes the entire fruit, making the chocolate 100 percent sustainable as well.

“It is much more than an innovation. It is a revolutionary development that satisfies a consumer need like no chocolate has before,” Woolley added. “We hope that it will have a major impact on the confectionery industry for years to come.”

American Packaging was named a finalist for its enhanced FSC-Certified paper pouch. The development has been used for Nestle Canada’s Smarties and is Forest Stewardship Council certified.

He added that in addition to being better for the environment, the packaging’s unique heat seal and coating makes it more durable and resistant to chocolate and grease than traditional paper packaging.

Sean Flaherty, director of business development, American Packaging, told Candy & Snack TODAY that it is very important to the company to bring new innovations and ideas to the market.

“Either you innovate and invest capital and resources on the newest printing and lamination technologies, or the market will move forward without you,” he explained. “Understanding the trends and future requirements of your customers is paramount for success and will lead to future growth.”

The second finalist, Blommer Chocolate, was acknowledged for its Armstrong Gold reduced-sugar chocolate-flavored drops, which are part of its Discovery product line.

According to Stacey Kidd, marketing communications manager at the company, Blommer has been providing innovative solutions in both chocolate processing and formulating to its customers since 1939.

“For decades, the people at Blommer have been dedicating themselves in constantly finding new ways to make better-for-you chocolate taste even better through technology advancement,” she added.

Each drop has 50 percent less sugar, fewer calories and more fiber when compared to a traditional chocolate chip without the use of sugar alcohols or high-intensity sweeteners, according to the company.

“We live in a rapidly changing world and our industry is more interruptive than it’s ever been,” Kidd said. “With digitalization enabling and influencing what and how people choose to enjoy their food, it is pertinent for the industry to stay relevant and transparent, especially for the beloved confectioneries that have brought joy and happiness to decades of consumers.”