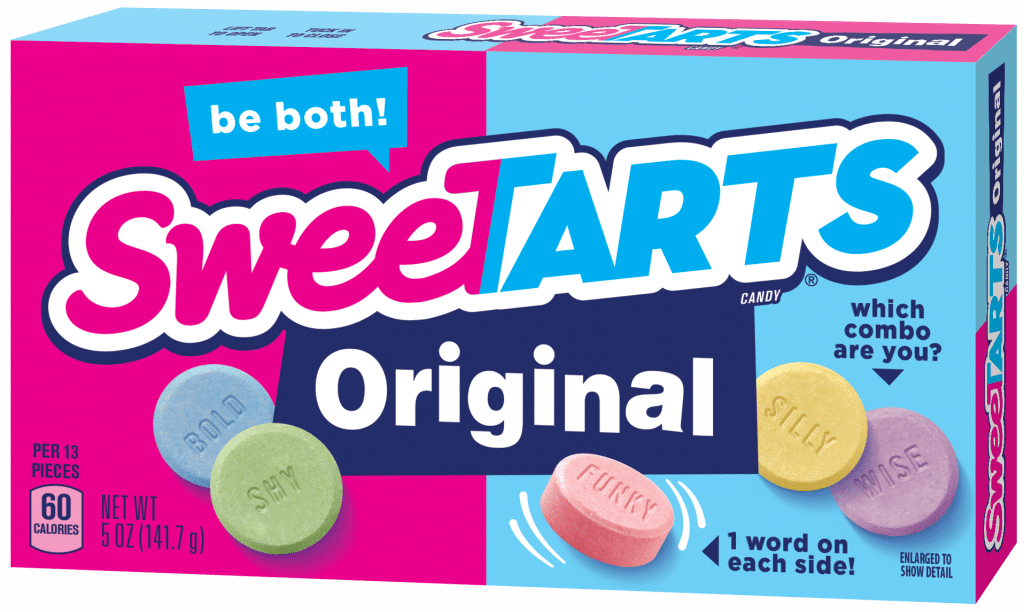 In addition, the brand, which the company claims has 94 percent brand awareness, has had a graphics refresh and will be incorporating its “Be Both” marketing campaign into two offerings that will debut in 2021. SweeTarts original tablets will be embossed on both sides with messages in keeping with the “Be Both” campaign, including seemingly contradictory words such as ‘shy’ and ‘wise.’ The embossed candies will also be offered in roll packs. The 1.8-ounce roll packs and five-ounce theater boxes have a SRP range of 99 cents to $1.29.

Hitting shelves earlier this fall were Nerds Gummy Clusters. Each piece offers a cluster of crunchy, tangy, mini-rainbow Nerds coating a fruity gummi center, which the company notes fits into the dual-texture trend. The company is also rolling out a uniform look to the Nerds portfolio with a redesigned logo and product packaging that enhances the presence of the brand’s characters on-pack. Three-ounce share pouches have a SRP range of $1.29 to $2.09, while three-ounce value bags have a SRP of $1 and three-ounce theater boxes have a SRP range of 99 cents to $1.

Continuing to build on its cookie portfolio, the company is adding Keebler Fudge Stripes and Chips Deluxe in king-size, reclosable packs. The company recently rolled out an improved recipe featuring more real ingredients, including real chocolate and real Keebler fudge along with a packaging update that maintains the brand equity.” Fudge Stripes will be available in 4.75-ounce, 10-ct packs, while Chips Deluxe comes in 5.3-ounce 10-ct packs. Both items carry a SRP of $1.99.

In addition, the company will debut both its Keebler Fudge Stripes and Mother’s Circus Animal cookies in theater boxes in February. The 1.5- to two-ounce boxes will carry a SRP of $1.10.