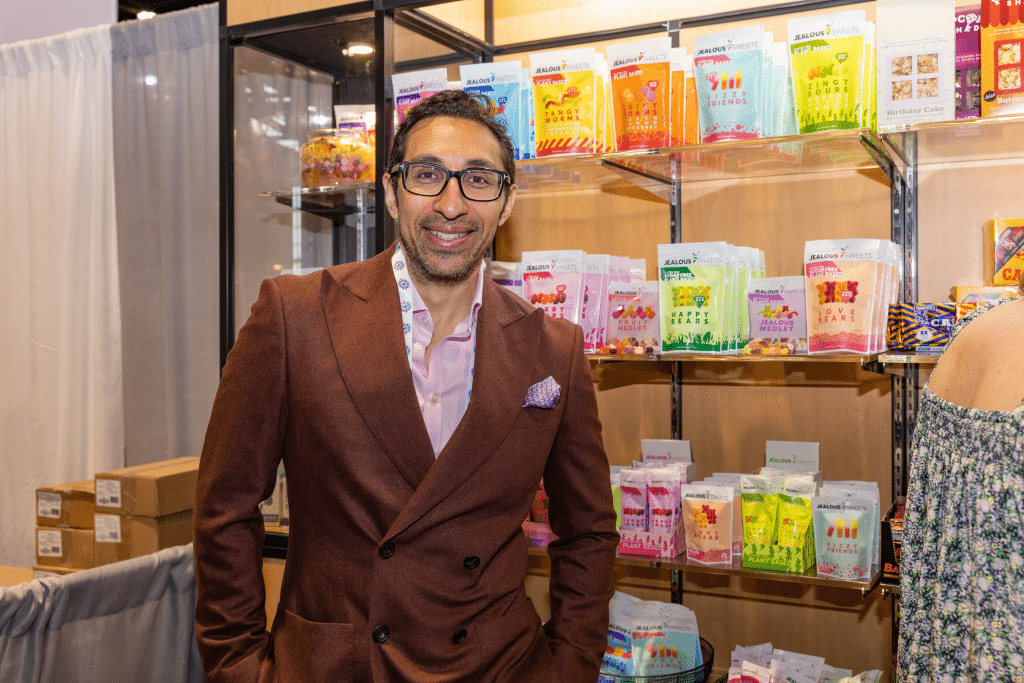 To tap into this trend, many manufacturers unveiled plant-based offerings at the Sweets & Snacks Expo.

Small Wins gummies from Side Step Sweets are made with pectin instead of animal gelatin, which gives the candy a non-sticky texture. The decision to develop a plant-based product was inspired by other health-conscious decisions the company was making.

“Our brand is about celebrating life’s small wins,” Michael McDonald, president and CEO of the company told Candy & Snack TODAY. “We aim to be allergen-free and in order to do that we really had to look at our ingredients and what we were choosing to put in our products.”

The gummies are available in classic and sour with peach, strawberry, green apple, watermelon and lime flavors in each variety. Each gummi is sanded in a low-sugar coating and is shaped to resemble its corresponding fruit.

VegoBears, a brand from Candy People, LLC, is offering vegan gummi bears with flavors inspired by California beaches. Made with pectin, the candy is available in Santa Monica sweet, Malibu foam and Venice Beach sour varieties.

“We wanted to create a product that was closer to nature,” Garrett Zaro, the company’s sales manager, explained. “We strive to use honest ingredients that don’t harm animals or the environment.”

Another company with plant-based gummi options is LBB Distributions, Inc. Its Jealous Sweets brand gummies are offered in single variety and medley packs.

Company Co-Founder Imran Merza explained that although the candies have never contained any animal products, he decided to update the packaging to replace “vegan” with “plant-based” messaging to appeal to a wider audience.

“Sometimes people are hesitant to be associated with the word vegan,” he said. “Changing our branding to plant-based opened up doors to the flexitarian community who don’t want to feel as restricted.”

Merza also noted carbon emissions as a key reason the company decided to experiment with plant-based recipes. “Most gelatin is produced in South America and sent to candy manufacturers around the world. Between the amount of cattle needed, the production of the material and the time and energy it takes to ship, those emissions are way above what plant-based options produce,” he explained.

Thierry Nosesen, founder administrator of Belvas Belgian Chocolate added that people are beginning to move towards quality in their snacks whether it be plant-based ingredients or just organic.

“It’s something that people in Europe are very aware of and it’s becoming more popular here in America,” he explained.

Belvas dark chocolate covered plant-based marshmallows are made with carrageenan, an extract from red seaweed that is used as a thickener and gelling agent. The product is available in 3.5-ounce bags that ship in six-ct cases.

Mark Hepworth, UK manager for Freedom Confectionery Ltd., noted that the company has only recently noticed the demand for plant-based confectionery hitting the U.S. market. He added: “For so long, people thought that vegan or plant-based food just tasted like cardboard.”

Freedom Vegantic Mallows are also made from carrageenan and are available in vanilla and strawberry flavors. They have a 12-month shelf life, almost double that of other plant-based marshmallow brands, Hepworth said.

However, he admitted that there are limitations to plant-based formulas, primarily in the size of the candy, but that this is only a small obstacle compared to the bigger picture. “We’ve had people who haven’t had animal products in over 15 years trying our product and they can’t believe how similar it is,” Hepworth said. “They said ‘It tastes like I remember a marshmallow tasting,’ and that’s the best part.”