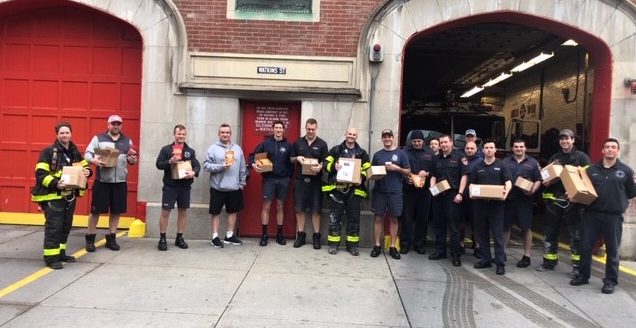 Rockaway Beach, NY — On March 16, The Madelaine Chocolate Co. closed its factory and company store in an effort to ensure the health and safety of its staff and customers. The company, which offers a broad selection of Easter and Passover product, was left with an inventory of chocolates that had been produced for the holidays.

According to a report in a local newspaper, when approached by a local business about a way to sell the inventory company President Jorge Farber said: “I don’t want to sell the chocolate. I want to donate it.”

Farber explained: “We are a chocolate manufacturer and none of our equipment or specialty lies in producing masks or any of the much-needed PPE, but we want to do whatever we can with the resources we do have, which is chocolate.

“There is something to be said for chocolate and sweets bringing comfort in difficult times — and if there is a small amount of relief and comfort that our chocolates can bring, specifically to those whose work is essential, as well as to their families who I am sure are anxious and concerned for their safety on a daily basis, we wanted to find a way to do that,” he told the newspaper.

Farber enlisted the help of local  travel agent Marilyn Harvey, owner of Breezy Tour & Travel, to come up with a list of hospitals, healthcare facilities, fire houses and EMS stations, police precincts, transit hubs, postal offices, military bases and essential businesses like grocery stores in the area. The result was a list of nearly 60 locations.

On April 6 and 7, the volunteers, along with Harvey, delivered Madelaine chocolate bunnies, eggs, truffles and more to firehouses, police precincts and businesses, and hospitals as far as Mount Sinai / South Nassau Communities Hospital on Long Island, Mount Sinai Brooklyn and New York-Presbyterian Medical Cen­ter in Manhattan, along with a note of thanks from the Farber, Gold and Kaye families.

As word of the donations spread, Farber says he received calls from those who received chocolate, thanking him, and from others on the front lines who heard about the holiday drop offs. In response, the list grew, and drop offs continued into April 8.

Farber said the response from the local volunteers was not a surprise. “They’re amazing and it’s not surprising. We saw how the neighborhood and people reacted to each other and with each other after Sandy. We saw how hard we were hit by 9/11 and how quickly people jumped in to help when the plane crashed in Belle Harbor two months later. Now we’re seeing that again. The spirit of volunteering is immense. There’s something commendable about our Rockaway area and neighbors,” he said.

For Farber, who celebrates Passover, this year’s Seder was about focusing on the things that matter most. “We focused our thoughts and prayers for all of this to pass. This neighborhood will stay strong. Let’s all stay safe and healthy.”

Henderson, NV — Ethel M Chocolates, part of Mars Inc., is offering a virtual experience this Valentine’s Day season by giving consumers the opportunity to attend chocolate tastings from the comfort of their homes. The events will be hosted during…

Hershey, PA — The Hershey Co. is expanding its Whatchmacallit brand with the introduction of Whozeewhatzit bars. The new bars, which include a peanut butter crème layer and rice crisps covered in a chocolatey candy, will be available at retail…