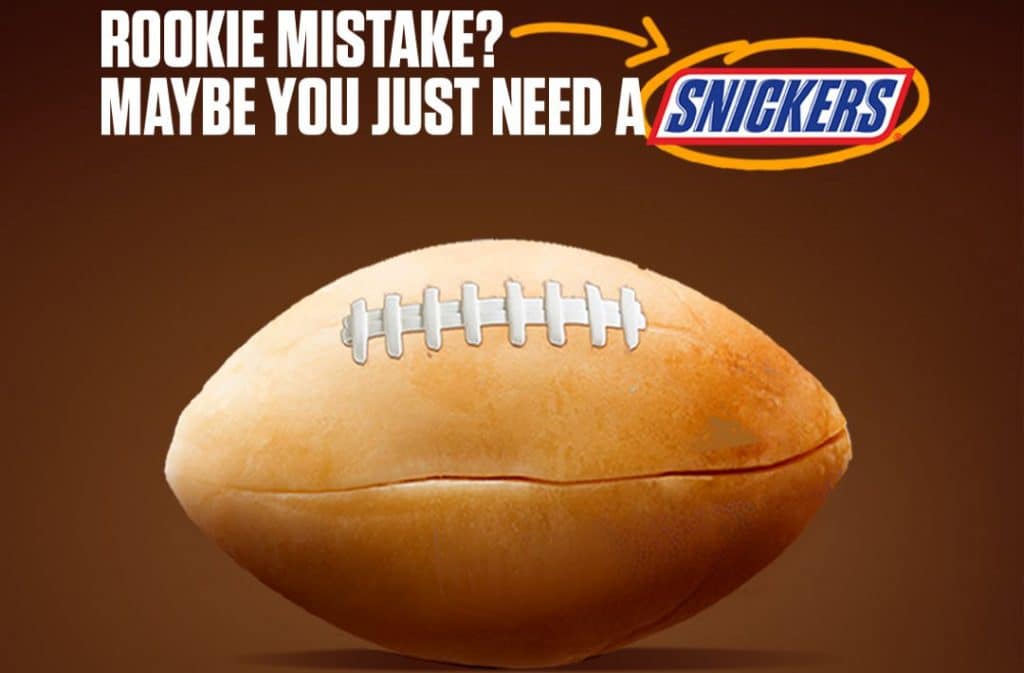 Newark, NJ — Mars Wrigley has launched a promotion for its Snickers brand, which is ‘The Official Chocolate Bar Sponsor of the NFL.’ Dubbed the “Snickers Rookie Mistake of the Year,” the program celebrates the rookie mistakes consumers share during the NFL season.

A rookie mistake isn’t an error that occurs due to bad luck, the company reports, but instead “a funny misstep made when you’re off your game.” It’s unlikely that a rookie mistake is made twice, especially after having a SNICKERS. For example, forgetting your phone with a link to your tickets on the charger at home . . . rookie mistake.

Throughout the NFL season, consumers can submit rookie mistakes on snickersrookiemistakes.com either through video, photo or written submissions. At the end of the regular season one rookie mistake will be crowned the ultimate ‘Snickers Rookie Mistake of the Year.’ A panel of NFL player judges will be on hand to choose the top submission, with the winner receiving two tickets to Super Bowl LVI in Los Angeles.

The company says that throughout the season, NFL-themed prizes will be awarded to consumers who have shared rookie mistakes, including surprise visits or shoutouts from current NFL players and Snickers.

“NFL season kickoff is one of the most highly-anticipated moments of the year, and we’re excited to bring better moments to fans as they come together to celebrate the return of America’s favorite game through Snickers long-standing partnership with the NFL,” says Sarah Long, CMO, Mars Wrigley North America. “Rookie Mistakes happen both on and off the field, but we’re here to tell fans that if you made a rookie mistake, the solution is simple, maybe you just need a Snickers.”

To launch the campaign, the brand has teamed up with wide receiver JuJu Smith-Schuster to share examples of rookie mistakes he has made both on-and-off the field.

“We’ve all had our share of rookie mistakes, don’t worry about that,” says Smith-Schuster. “That’s why I’m pumped to be part of this program and to help the Snickers brand bring fans together through hilarious rookie mistakes that happen to us all. Plus, there’s some incredible prizes up for grabs! So, don’t be shy, make sure to head to www.snickersrookiemistakes.com and share yours. I can’t wait to see what you send in!”

Brantford, ON — Barry Callebaut Group broke ground on its newest factory in Brantford, ON, Canada.  The factory will be focused on sugar-free, high protein and other specialty chocolate products. In attendance were Barry Callebaut executives Chris DiMambro;  Balaji Padmanabhan; …

Chicago — Hormel Foods Corp., the makers of the Planters snack nut brand, is introducing peanut-shaped, flavor-forward packaging for Planters Dry Roasted Peanuts that utilizes less plastic.  “Our new packaging allows us to truly stand out with a unique ‘shell’…