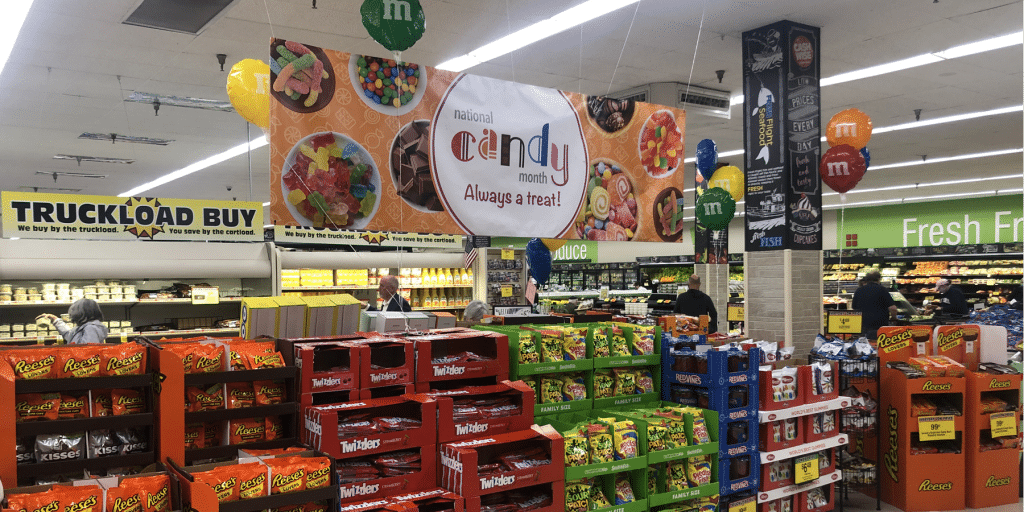 Discover how National Candy Month played out at three retailers that supported the month-long celebration this year.

Cleveland — Hy-Vee, Inc.; Coborn’s, Inc.; and TravelCenters of America, LLC participated in National Candy Month this year, demonstrating the opportunity it presents and how to execute the fifth season in stores.

“I honest to God think it could be the number two season,” says Deb Sammon, assistant category manager for Coborn’s, which operates more than 120 grocery, c-store and other retail locations in the Midwest. “National Candy Month exceeded Mother’s Day, and it is very close to Christmas, but not quite Halloween. We were up more than 30 percent in the category. As far as two-week ad sales, we were up approximately 50 percent compared to other ads.”

Other retailers that got in on the celebration agree National Candy Month is already comparable to other holidays.

“It has been very positive overall,” confirms Todd Gean, Hy-Vee category manager – candy. “After Easter you don’t have much seasonal, maybe some summer products like red, white and blue for July Fourth and Memorial Day.”

With this summer being a bit different than any most people can remember, National Candy Month brought a spark of joy to retail employees as well as shoppers, according to Peter Kempton Jr., TravelCenters of America’s category manager, store team — candy, snacks, grocery.

“Results-wise, year-on-year might not be as grand as we wanted because of everything going on, but it has helped the category and really boosted morale in stores with the tough past few months we’ve been having,” he tells Candy & Snack TODAY.

Kempton notes the catalyst for TravelCenters to support the event was attending NCA’s 2020 State of the Industry Conference.

Unlike most candy promotions TravelCenters runs at its 250 stores in 43 states, Kempton says National Candy Month decisions were made at the store level.

“We didn’t really send anything other than the signage and just told the stores to make it their own thing,” he says. “They really appreciated being given that room for creativity.”

At the 245 Hy-Vee locations, National Candy Month played out in themed weeks, explains Gean. The first week focused on gum and mints and was slated to include a bubble-blowing contest, which was unfortunately canceled because of the pandemic. For the second week, the retailer tied National Candy Month into its 90th anniversary celebration and kicked it off with The Hershey Co.’s Birthday Cake KitKats and upscale birthday cake-flavor cotton candy. The third week was red, white and blue themed and featured brands including Mike And Ike, Sour Patch Kids and Hershey’s. The month closed out with a candy carnival theme centered around cotton candy, nostalgic products and “a lot of non-chocolate,” Gean says.

Knoblauch tells Candy & Snack TODAY his position on the NCA Retail Advisory Panel led him to get behind the event.

“During a panel meeting, the Retail Advisory Committee brought up getting National Candy Month going and talked with us about how we could do it,” he says. “I said ‘man, that is a great idea. Let’s do it.’”

Typically, Coborn’s runs a summer promotion in May or early June centered on eight to 10 items, but it ran a month-long promotion for the category during summer 2019 that spanned a four to eight-foot set.

“This year it was eight to 12 feet,” Sammon explains, adding: “It is growing more into a permanent seasonal event. National Candy Month is a period to do something different in the category that you can’t do in the other four seasons.”

When asked if their stores planned to repeat the National Candy Month event next year, all three replied yes.

The 2020 program is the start to a five-year path to tap into the true potential of National Candy Month, according to NCA President & CEO John Downs.

“It will take manufacturers working closely with their retail partners to set up merchandising and promotional programs that harness the excitement of National Candy Month,” Downs says. “Given the passion and results we saw at retail this year, I think we are on our way to unlocking the full potential of this dynamic new season during the next few years.”

For retailers considering participating in next year’s National Candy Month, Coborn’s Knoblauch says with a laugh: “If they compete with us, I’d say it doesn’t work. For everyone else, go for it. It has been an overwhelming success.” C&ST

Cleveland —An article in the New York Times showcases Americans’ optimistic desire for Halloween celebrations this year, highlighting The Morning Consult’s poll that found 63 percent of adults believe people will find “creative, fun and safe ways to celebrate” the…

New York — Global sales for confectionery packaging are anticipated to increase 2.3 percent by 2027, hitting a value of $11.1 billion, according to ReportLinker.com. The market was estimated to be worth $9.5 billion in 2020. Plastic packaging sales are…

San Francisco — Worldwide sales for organic snacks are expected to increase 13.3 percent, compounded annually, by 2027, according to Grand View Research, Inc. The market is projected to be valued at $19.9 billion by the end of the forecast…