Over the past two weeks, I’ve been reading in the New York Times about a scheme by many Central and Eastern European countries to take advantage of the billions of dollars given by the European Union in agricultural subsidies each year. This money, which was intended to support farmers and enrich the European economy, was instead siphoned to an “agricultural mafia” made up of a select group of well-connected oligarchs thanks to a series of back-room negotiations and state-sponsored auctions.

I was struck by a thought: those outraged by the exploitation of EU agriculture subsidies would benefit from taking a closer look at the U.S. sugar program. There is no doubt that the corruption uncovered by the New York Times is an abuse of the EU agricultural subsidy program, but readers of the New York Times who have joined us in our fight to reform the U.S. sugar program are likely experiencing a bit of déjà vu.

For decades, the U.S. sugar program has thrived thanks to a series of subsidies, price supports, market allocations, quotas and guarantees from the federal government, allowing this system to go untouched since the Great Depression. But these subsidies aren’t protecting small farmers. Instead, the domestic sugar program lines the pockets of a select group of 13 sugar mega-processors at a cost $2.4-$4 billion to small businesses and taxpayers and protects these mega-processors from any market risk.

The parallels between these two agricultural mafias engaging in back-room deals to profit off subsidies at the expense of the taxpayer were too similar for me to ignore.

The U.S. sugar program, originally created to be a Great Depression-era boost for an important domestic industry, has overstayed its welcome and instead mutated into an outrageous and outdated system rife with abuse at the expense of the American taxpayer and the American manufacturer. Thanks to the immense support they receive from the U.S. government, the 13 domestic sugar mega-processers are shielded from all competition, forcing American manufacturers to pay twice as much for sugar as the rest of the world. Furthermore, these sugar mega-processors are provided taxpayer-backed loans at zero risk, costing U.S. citizens hundreds of millions of dollars every year and adding to the already significant taxpayer burden from the government-funded subsidies.

Congress’s unwillingness to engage with the sugar program for the past 80 years has not only cost the American taxpayer untold billions in taxes but has also killed hundreds of thousands of jobs. More than 123,000 jobs have been lost in industries that rely on sugar over the past twenty years due to increased sugar cost from government support, and according to the U.S. Department of Commerce, the program has an adverse multiplier effect: for every sugar-processing job saved through artificially high U.S. sugar prices, three American manufacturing jobs are lost.

Like the European Union to its member states, Congress is acting within its powers to issue subsidies and support to the domestic sugar industry but is ill-equipped to address its abuses. The National Confectioners Association and our allies in the food manufacturing sector have raised this issue in the context of the Farm Bill cycle time and time again, but the influence — both monetary and political — of these 13 sugar mega-processors has ensured the domestic sugar program goes untouched to this day.

Before turning our gaze on the corruption in the European Union and Central and Eastern Europe, we need to get our own house in order. It’s time to stop pretending that crony capitalism is a European problem. Right now these mega-processors operate at zero risk year-in and year-out while American small businesses and manufacturers get zero access to an adequate supply of sugar at a fair price and American taxpayers foot the bill.

I’ll echo here what NCA been saying for decades: It’s time to dismantle this rigged system and end this sugar shakedown. Whether you’re the European Union or the U.S. Congress, combating crony capitalism doesn’t happen with a hands-off approach. We need to reform the U.S. sugar program in a way that curbs sugar mega-processors without further burdening American manufacturers, small businesses and taxpayers or harming small farmers. It’s time to stop bureaucracy and back-door meetings from driving our nation’s agricultural programs.

*This piece was originally published on Medium.com on November 14, 2019. 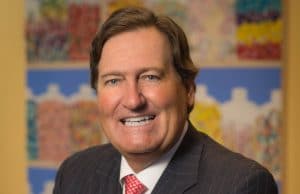 John Downs is the president and CEO of the National Confectioners Association, a trade group in Washington, D.C., representing the nation’s candy makers.

Is there a better debate than the one surrounding candy corn? Love it or hate it, consumers report that there is a right way to enjoy it – and the National Confectioners Association has done the heavy lifting in terms of public opinion research to get to the bottom of this burning question. A recent NCA survey found that 33% of candy corn loyalists nibble the narrow white end, just 16% start with the wider yellow end – and more than half of all consumers just go for it and eat the entire piece at once.

Chocolate and candy are a centerpiece in so many Halloween traditions – making the season’s arrival the most exciting time of the year for the confectionery industry. I’m thrilled to share that this year, the Halloween season is even sweeter because America’s chocolate and candy companies delivered on their commitment to helping consumers manage their sugar intake by providing more transparency, choice and portion guidance options when it comes to our favorite treats.